I don't know what my position in the industry is right now, but I like the feeling of people knowing and liking my music whether they're in the industry or if they work at Rite Aid.

Jesse Boykins III isn't quite your average Soul singer. With influences ranging from Motown, Hip-Hop, Reggae, all the way to Salsa, his band and him try to incorporate all of these styles and cultures while still creating catchy, yet sophisticated Soul music; enjoy.

iR: How is the tour coming along?

JB: That's a tough question. I'm from Miami, so I like Tropical Weather. So California was very close to home as far as the vibe, but I also like just being places I've never been to. I just appreciate even being able to travel.

JB: I actually think its coming back around. I went to New School University for Music so I've always been around musicians and I'm a Musician myself, so I much rather keep the music as real as possible.

iR: What kind of experience did you have to go through over at New School University?

JB: it was a great one, I was surrounded by Driven working, touring, musicians, so I just picked all my homies brains as far as their creative approach on things and also the business. Marketing, promoting and what not.

iR: When you were recording the Dopemine EP, what state of mind were you in?

JB: honestly, I was looking at it like a therapy session, so after every song I recorded I felt good. I was in my Artist mode. A true artist using my music to let out what I was going through at the time.

iR: Do you think that similar artistic integrity has any chance of making an appearance within the mainstream anytime soon?

JB: there are some artists in the mainstream that are passionate and expressing themselves through their art. I just think it's the [Major Labels] that don't allow that side of an artist to be seen.

iR: Since they aren't allowed to show this side we may never know. How do you feel about the music your mainstream peers are releasing though?

JB: I'm a lover of music and I know that there's different kinds of music for different ears. I listen to everything, mainstream, indie, house, trance, electro and I feel like mainstream is zombie music. I don't think people who make one hit wonders sit in the studio while there recording and think ,"I hope people 20 yrs form now listen to this song" but that's the kind of music I try to make and that's how I think when it comes to creating [music].

iR: Yeah, I am pretty eclectic myself, what records do you listen to outside of Soul or Hip-Hop?

JB: I'm really digging Little Dragon. I love ColdPlay on the low [Laughs] and I been vibing to this artist from Africa her name is GiGi. I been getting into alot of old school stuff too, like Jimi Hendrix.

iR: How has world music influenced you, would you say it is a direct influence?

JB: I feel like world music is honestly the start of most music dating back to all that music from the eastern hemisphere. World music has influenced everyone's music whether they know it or not. 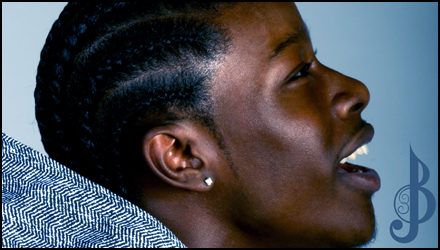 iR: How is your debut album, The Beauty Created, coming along?

JB: Great! It should be out July 15th. I'm very excited to release a full length album. The band and myself along with 2 or 3 producers that I dig have been working on a classic in the making, at least in my eyes.

iR: that's where it counts, but what can we expect? is there any features?

JB: I cant reveal everything [yet], but expect REAL MUSIC, Lyrics that are catchy but still have a message in them. It's also an album for lovers, so expect people to have babies [laughs]

iR: [Laughs], How big of influence does the band have in your lyrics or song structures?

JB: I named the album after the name of the band, because I feel like it's what we've been doing for a while, It's a team effort. We create beautiful music [and] stack ideas. My boy Steve Wyreman plays guitar in [the] band and also for Keyshia Cole along with some other big names, wrote with me as far as chords and arrangements. My boy Ojay is a dope trumpet player and my production partner always has ideas and great tracks that we build on. As far as lyrically, that depends whatever I'm thinking about or the first feeling the song we're producing gives me.

iR: how long have you guys been together?

JB: I mean most of us went to New School so we been friends since 2002-2003, the band started around Spring 2006, but we played together in class, so it's like we were always a squad.

iR: Are you comfortable with your position in the industry?

JB: I don't know what my position in the industry is right now, but I like the feeling of people knowing and liking my music whether they're in the industry or if they work at Rite Aid.

iR: and that's real. Thanks a lot for the interview man, you got any shoutouts?

JB: I appreciate you having me. Yezzir, Shout out to NomaDic MuSic/ Briclyn Ent, AD4clothing, GFCNY, J Shotti Photography , Haize Rava Designs, Dr. Woo, House Of Moss, My Cali Connect and everybody checking out this interview and you for having me. You can check for more from Jesse over at his Myspace.

Best In The City (The 5 Borough Tour)