I don’t know if this only happened at my middle school, but before screenshots and group texts, girls would print out AIM conversations they’d had with their crushes and bring them to class the next day to discuss and analyze with their girlfriends. Thinking back on moments like that reminds me just how much AIM was truly part of the culture growing up and how it quietly shaped the way we communicate now.

People my age have a unique relationship with the telephone. We’re old enough to remember collect calls and three-way calls and dial-up, but there was always a clunky analog nature to the device that didn’t correspond with the potential of the new technology that was emerging at the time. On the phone, you had to talk to adults before you talked to your friends. You had to get off the line because someone's parent had to use it. We’re lucky that we had those experiences because we have telephone etiquette and know how to hold a conversation, but AIM provided a direct line of communication, free of supervision, that was no doubt the preferred method. 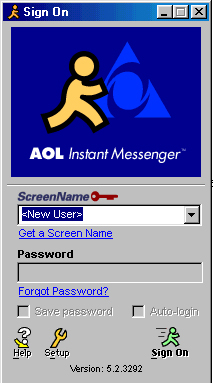 For some, AIM came via those free AOL trial discs that they mailed to your house every five minutes. The rest of us were on Internet Explorer or Netscape Navigator and we just downloaded the AOL Instant Messenger app before apps were even apps. AOL was a big deal. We were living in the midst of the dot-com bubble before it burst. AOL was some new online shit and they fucking bought Time Warner—the poster child of old guard media conglomerates—for $164 billion. The Internet got real and you knew that the online shit that your parents didn't fully understand wasn't a game. You knew that you needed a screenname.

That screenname choice was important as fuck, too. Every girl that I knew had some variation of "blinksk8rprincess" as hers and every guy that I knew had some variation of "coolsportsguy69" as his. Once you started building that buddy list, an entirely new world was available to you. AIM wasn’t like being on the phone with your mom eavesdropping in the next room. It wasn’t like talking at school with mad people surrounding you and judging you. Although there was certainly copying and pasting and general treachery, it was a mostly private ordeal. It was a type of interaction unlike anything that had ever existed.

There were some hilarious, deep convos on AIM. The day after a long, entertaining chat with your crush you'd see them at school and it felt like your relationship was all serious now. No one had a 100% success rate, though. There were definitely times when you really liked a girl and talked to them for like four hours on AIM but she was chatting like 12 other people including dudes she actually liked and you got friend zoned and gossiped about. But there were also great situations where you found out that a crush was mutual and typed things like “do you wanna be my girlfriend” and got a “yes” response and then you’d hug each other in the hallway at school a lot and make out at someone’s birthday party from 6pm to 10pm on a Friday night. Middle school was weird. Real shit was happening offline and AIM was such a key factor in a lot of it. 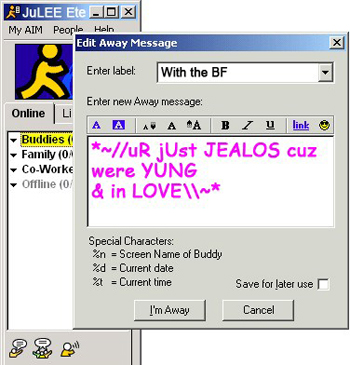 AIM was also pretty much the start of social media. There was a lot of exhibitionism. Away messages were the peak example of this. Sometimes the away message you left up for nine hours was more important than any conversation you had that day. It was the original flex. It was the original tweet. You wanted to let people know that you had an awesome life. Away messages were basically a way to say, "Your lame ass is on the computer but I’m out here getting it." You left away messages like that when you could. You also found out about fun stuff other people were doing via away messages and felt left out.

Despite all the fun and flirting, AIM could piss you off. Hater ass people would feel comfortable coming at you with some disrespectful shit that they would never say to you in person. Like, I got in a fight in seventh grade and got suspended and kicked off the basketball team and student council, but I came back on some epic shit in eighth grade. I was better at basketball and the same people who kicked me off had to see me thriving consistently, but on top of that, I won class president, which was like the ill popularity contest, and I beat this pretty boy who all these girls loved and a bunch of them IM'd me fuck shit about how I didn’t deserve it even though they congratulated me when the results got announced at school. That was always crazy to me, but I still sonned the fuck out of them in that same chat window and I was their class president and I gave the graduation speech and there was nothing that they could do about it.

So yeah, you had that type of shit. People warning you. People blocking you. Subprofiles where you got no love from people who you thought were your friends. Crushes signing off without saying goodbye. The defeating sound of that sign off door slamming. Speaking of the alert sounds, you know you were really about that creep life if you assigned a special sign on sound to the person you liked. Shit was like Pavlov's Bell. If you were officially dating, that was the signal to hit them up right away. If it was someone who you just had a crush on, you had to regulate your thirst and linger for like 20 minutes before sending a message. If you got an IM first it was such a win. "Person You Like is typing” moments were tense. 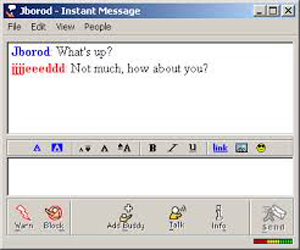 You talked about the sex that you weren’t having. You talked about what movie you were going to see at the mall that weekend. You talked about MTV and how you and your friends should have your own Real World and how you’d host the VMAs one day. You talked about how good the last Disney Channel Original Movie was and what kind of Pokémon cards you came up on. You talked about who you hated and who was cool. You talked about what music to download on Napster and Kazaa and sent some of it over AIM transfer. You had vaguely decipherable voice chats using one of those dusty ass PC microphones. You really built good friendships on AIM. You felt like somebody was your best friend because you talked online. All of those politics carried over into the dynamic of the lunch room and school dances. It was quite the time.

And it wasn’t just what we said but how we said it. Emoji culture started on AIM—back when they were called emoticons. YoU hAd Ppl WhO tYpEd lYkE dis. You had the revolutionary shorthand like TTYL and LYLAS. If you’re a real weirdo you might’ve hopped off in the chat rooms on occasion and hit up some random girls from 2000 miles away with the A/S/L and begged for a pic. Even buddy icons pioneered the all important profile photo.

Now, all of that’s standard. People are on Gchat and Facebook chat everyday. We’re on iMessage every second and it’s the same fucking concept. AIM started all of that. It’s where we birthed digital personas and realized that they weren’t some distant entity but a real part of our identity that had a legitimate impact and influence on our lives. This isn’t about taking some pointless, sappy, nostalgic trip down memory lane. AIM was simply real as fuck and paved the way for a lot of the shit we do now and I just wanted to take a moment to acknowledge that.