I can't trust anybody who actually knew how to play the Pokémon card game. Like, if you knew how to use an Energy card, please get the fuck away from me. It's not that I'm trying to impose superficial judgments on people who played the card game, but I do think that anyone who did missed out on the real lesson of it all. Pokémon cards were strictly for collection, display, and stunt purposes. Before we had to think about car payments, rent, or vacations, these little cards informed our taste level and outlook. In a way, they taught us a lot about the basic, surface level values that define adulthood. The Pokémon card trade advocated ideals centered around: Get what you want, take what you need, and use what you have to your advantage. Anyone who’s winning later in life is likely operating by the same code.

The official Pokémon card game wasn’t wack because I was too cool for it or anything. On occasion, yes, I was the archetypal adolescent male, spending a lot of time outside riding bikes, playing football, and all of the other fun stuff that society tells you that you’re supposed to enjoy as a youth, but my generation marked a shift in the status quo. During that brief moment in life where you practically have no responsibilities (peaking with the time from Summer 1999 to Summer 2000, in my case), I spent many hours cooped up indoors, nerding out. I was playing Metal Gear Solid, Crash Team Racing, Ape Escape, Syphon Filter, and Tony Hawk’s Pro Skater. I was playing those fucking games for so long that I remember at least a dozen occurrences where my parents looked at me in disdain for it. I was told to turn off the game, get some fresh air, get outside, and be a kid, and I know a lot of people who heard the same speech. The Boomers that our parents were, they were still under the impression of the old guard; video games signaled antisocial disorder and inadequacy. Video games didn’t have cultural merit yet. We were months away from a PlayStation 2 that played DVDs and legitimized systems to the mainstream. Prior to that, too much gaming meant that something was wrong with you. We didn’t give a fuck, though. We knew that times were different. We knew that video games had meaning and value. Technology did, in general. Camera phones would be dropping in a couple of years. YouTube would be out soon after that. Traditionally “nerdy” mediums of entertainment would be invading everyone’s lives soon and lose their stigma as a haven for outsiders. Although it was the kids who played Magic: The Gathering and wore shirts like this who played the Pokémon card game proper, there’s still no hate on the card game that’s like, “Nerds did that.” We were all nerds about Pokémon. We got up early on Saturdays to watch the cartoon. We wanted the Pokémon Yellow edition Game Boy Color more than we want Air Yeezys now, but you didn’t bring the nerd attitude to the cards. Those were something else.

Pokémon cards were sacred. Trading them was like trafficking cocaine. Opening a package was like breaking down a brick. Showing off your card sleeves was like holding a stack of $100 bills. We saw Pokémon: The First Movie right after school, in theaters, on opening night. We went to Burger King during the film’s entire promotional run and got the tie-in toys that came with the kids’ meals. We picked up an issue of TIME when Pokémon was on the cover. We got the Pocket Pikachu and we really felt like Ash Ketchum walking around this bitch. I was a PlayStation dude, but if I played Super Smash Bros. at a friend’s house, I was fucking with Pikachu on principal. The entire movement was incredibly important and we wouldn’t see one like it until Dipset got hot a few years later, but it was the card trade that was our life blood. The card trade is where we earned our stripes. The card trade turned us into killers. Even if you’ve never sold cocaine or fraudulent stock, you can probably relate to Clipse or The Wolf of Wall Street if you tap into the ruthlessness of your acumen at the time. I learned more about economics from Pokémon cards than I did from an actual university level economics course a decade later. Two transactions in particular were especially memorable. Anybody who lived through this era at the age that we did knows that a holographic Charizard card was the holy grail of all things good and prosperous for a period of time. Before most of us had our first kiss and social priorities shifted, getting a Charizard was all that mattered. Every time you opened a pack of cards, you envisioned seeing one, but for most, including myself, that never happened. It did happen to this kid who lived down the street from me, though. That news spread like wildfire. “Elliott has a Charizard.” I wanted to run up on him like Juelz Santana ran up on the rival drug dealer in the “Dipset Anthem” video, and I did, more or less. He was 8; I was 10. It seemed feasible that I could pry the holographic Charizard from him like Rico did with Mitch’s 14 bricks in Paid in Full, and I succeeded. I traded him a holographic Mewtwo, and an Arcanine, did a lot of convincing, and walked away with the most sought after card in the streets.

Not even a day later, my dreams were shattered. Like you’d expect from a sensitive ass 8-year-old, he started having regrets and had his mom call my mom, then they came over to reverse the trade. I was scapegoated and shamed for using my wit and persuasiveness to make a power move. It wasn’t right, but it taught me that people in the world never want to see you doing too well, too easily. After that, my relationship with Pokémon went the way one’s relationship with MDMA goes if you take it every weekend and struggle to get high from it moving forward. I “lost the magic.” It was the end of a chapter for me. I was moving on. At this point, I was trying to get my first pair of Jordans. I was trying to get a girl to touch my dick for the first time. I had one order of business to handle, then I was getting out of the Pokémon game.

It was February 2000, and all I wanted in the world were those white and blue Jordan XVs. My parents laced me with a lot of shit, but they weren’t enablers. They were “you get a used car at 16 because we love you and your grades are good” parents, but they weren’t “you get a new Mercedes-Benz at 16 because we want you to show off and we want to live vicariously through you” parents. Even at 11, before I was a teenager, or had any discernible income, when I wanted a pair of $150 sneakers, they insisted that I show some work ethic and attempt to earn them on my own. I believe their rationale was, “You need to learn that you get things you want by working for them, and if we just give everything to you now without any effort, you’ll become a drug dealer in 10 years when we can’t do that anymore.” Luckily for me, word had spread amongst the 6th graders that I had a holographic Blastoise. The timing was perfect.

This kid Richard freaked out and gave me $50 for it, which, in 6th grade, felt like, $5000. Unfortunately, it was still only $50, no matter how much it felt like it was. My dad was more concerned with saving for my college tuition than putting up another $100 to help me get some Jordans, but I didn’t understand at the time. I cried in Finishline and hyperventilated on the car ride home and had to get some bullshit ass Gary Paytons, but it was a blessing in disguise. I don’t have any college debt, and those are definitely the ugliest Jordans of all time. The real takeaway is that, because of Pokémon, I learned how to hustle. I learned about finances and wealth accumulation. I learned things that have proven their worth as I’ve matured. 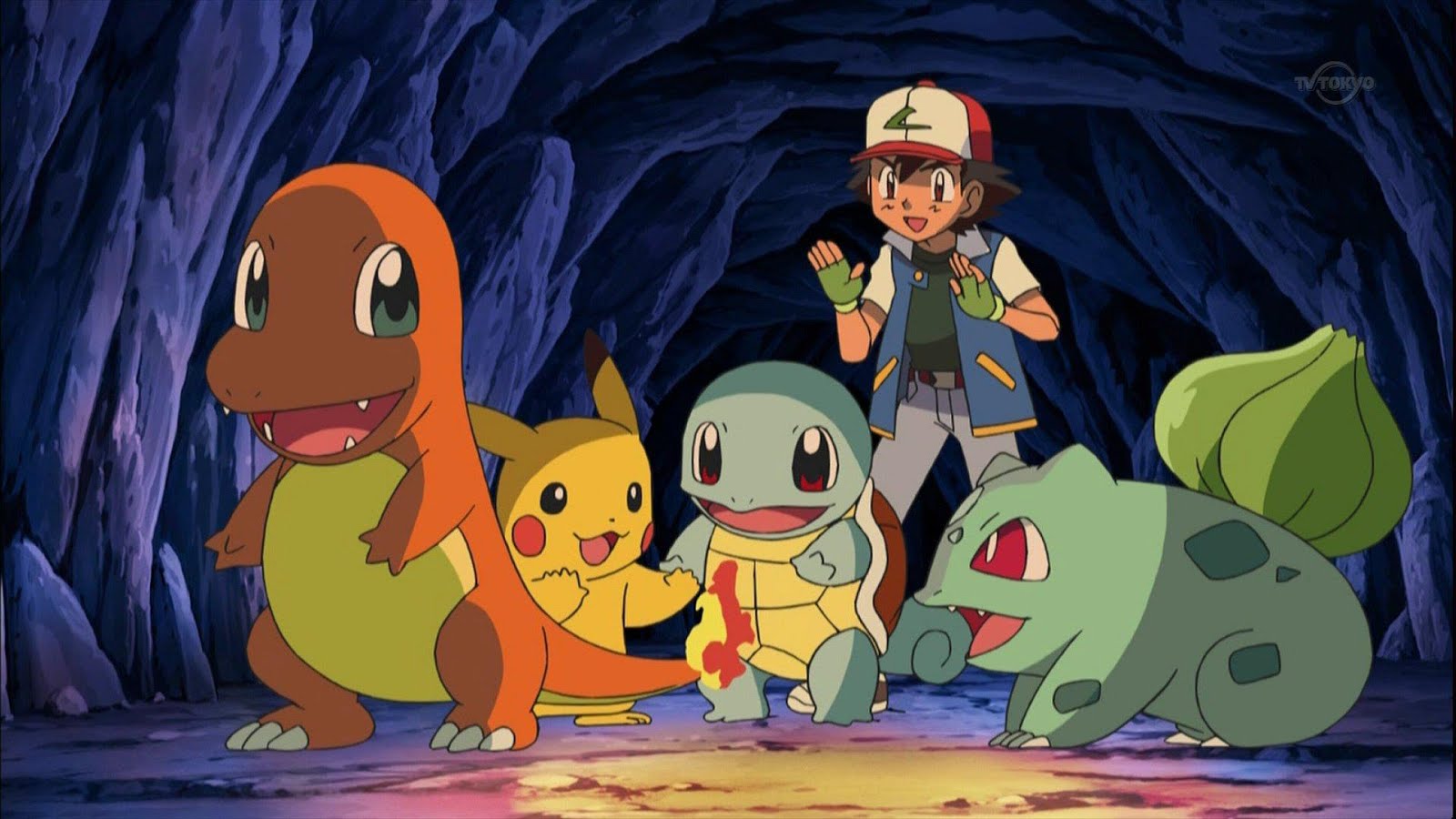 It seems like just as quickly as Pokémon became a phenomenon, it was over for so many of us. Marshall Mathers LP was out. We didn’t give a fuck about some damn Pokémon anymore. It was a new millennium. We were listening to Eminem rap disgusting shit like, “Fuck that, take drugs, rape sluts.” By 7th grade, kids were having parties that lasted as late as 11 p.m. or midnight—without their parents in the basement. Everything had changed, but it was nice to have Pokémon around during the interim. The evolutionary process taught us patience. “Gotta catch ‘em all” taught us perseverance. We knew that Pokémon was big business, too. Before Mark Zuckerberg, we saw that it was possible to make millions off of a hobby.

Now, it’s 15 years later and Pokémon is still popular to an extent, but its current capital is far from the cultural explosion that we witnessed. We comprise the rare clique of individuals who only know the original 150 Pokémon, and those references creep into contemporary art in very subtle ways. Young Thug has a song about how his diamonds “say Pikachu.” Yung Lean is in one of his videos showering the set with Pokémon cards like it’s champagne. Japan’s soccer team is using Pikachu as their mascot in the 2014 World Cup. Just look at how many people are watching Pokémon on Netflix. The impact that Pokémon made is part of our history now, and we made it happen, but we got something out of the deal, too. Pokémon taught us everything.